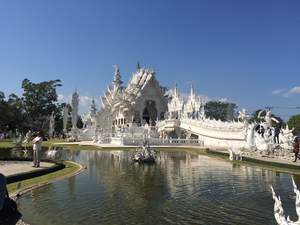 This is the White Temple, Wat Rong Khun, in Chiang Rai, Thailand.

It is filled with the Predator from Aliens, Neo from The Matrix, Darth Vader, and the World Trade Center. It is sculptural, architectural, unlike any temple in Thailand.

It is also massively, massively devout.

It's a place you can't really look at in full sunlight - every surface white or mirrored, eyes screaming for sunglasses. But putting them on feels wrong, feels like depriving your eyes of something genuinely holy. So you let every photon in. Your retinas will give out someday anyway. Better to have experienced this.

Remember that story of Buddha's enlightenment, from Light and Shadow? It's about that. But it's also about so much more. This is Buddhist tradition pulled into today, modern images telling an ancient story. Grounding you. Making you feel that instead of being this thing that happened 2,500 years ago, that what it's really about is today.

What do we do in the face of war, a suffocating planet, and the abuse of nearly every type of living thing - including ourselves? This is the world we actually find ourselves in. These are the challenges we must figure out how to overcome.

In moving through the white temple, one begins on the outside. With the predator. And bottles of liquor. With outreached hands, greedy, grotesque. With guns. Lots of guns.

You walk up a narrow bridge, guarded by a pair of creatures that emanate fury and holy.

You find yourself, delicately, on a bridge. Ancient koi swim in the pool below. The temple looms ahead.

You feel the grasping hands behind you now, still there, but not you.

You follow the path forward, down the bridge, onto the landing. You remove your shoes.

Directly in front of you is a man, meditating. Above him is a Boddhisatva, hands in vitarka mudra, discussing. Above him several Buddhas, each higher, larger. Each mudra different.

Then you feel it. A peace. A transcendence of the whole struggle, the root reasons of all that suffering actually overcome. You sit. You take it in.

Some time later, you get up to leave.

You turn to face the door, and find yourself face-to-face with a mural that covers the entire wall. It tells that story, the moment Buddha defeated Mara and attained enlightenment, using characters from every time and culture. 9/11 is here. Gas pump hoses curl around people's necks, tightening. In the center of the piece, a person. Sitting. Simply meditating.

You go outside, more bright white washing you inside and out.

You find a bench, sit, alone in your stunned silence.

You find, for many hours, that there are no words.