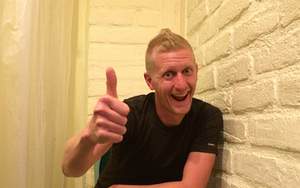 No. I'm serious. Let me explain.

See, explosive diarrhea doesn't happen at home, on a normal Tuesday. It doesn't come from eating the same foods you've been eating for years, or going to the same restaurants. It generally doesn't even live within 200 miles of your home.

Explosive diarrhea's also one of those taboo things that become Big Scary Monsters in our minds. Don't talk about them. Don't think about them. Gross! Scary! Admit it, you were even a bit iffy about clicking the link to read this piece (though you're totally going to share it with your friends - because if I squirmed at this, you will too). I mean ew, seriously, who writes about that stuff?

Well, after spending my birthday split between exploring a wonderful little town in Southern Mexico and making sure I was never more than 30-no-make-that-5 minutes from a bathroom, I do.

It turns out, when you've got the time to think (and I did), there are some really powerful things you can learn from explosive diarrhea.

Except in cases of serious dysentery (which is a real and terrible thing from unsafe water supplies, and which we should all probably be pitching in and fixing), it's really not a big deal.

If we're being honest, you've had trips to both the gym and the doctor that were worse. And you still go to those. Ok. So it's survivable. But that's not really a benefit in and of itself. Or is it?

Every day afterward for a few weeks, even when bad stuff happens, you'll automatically think, well, ok, this sucks, but at least I don't have this AND explosive diarrhea.

This happens because our brains are highly tuned toward making relative judgements, and generally really bad at making absolute ones. Having a couple days on the john resets some absolute facts back into your attention. Facts that are always true, and always amazing, but usually forgotten by our relative brains.

But what if you don't actually want to go through pouring your bowels out to get these realizations? Don't worry. You can get something great sitting right where and as you are.

Big Scary Monsters and Where the Good Stuff Lives

As I mentioned at the start, you typically only get explosive diarrhea if you're out exploring somewhere new. Somewhere you went because you took a chance, knowing it and other mishaps might happen. You got it because you were out there, where the good stuff lives.

This is exactly how life works.

Everything worth doing comes with a dollop of pain, awkwardness, and fear. Everything.

Once we get that, we see that explosive diarrhea isn't an indication that things have gone wrong - it's a marker that we're doing things right. It means we're out there, where the good stuff is. Even better, we can take that insight, and apply it to any of the other big scary monsters.

When we feel any of those things - they mean we're doing life right. We're out where the good stuff is. And the good stuff is always worth a bit of fear. Or rejection. Or pain. Or awkwardness. Or explosive diarrhea.

That's what I learned, spending my birthday on the loo.

That all the Big Scary Monsters are indeed big, and definitely monsters, but not actually scary. All that noise they make, inside our heads? That's them yelling to us, loud and insistent.

Hey! Hey! Over here! I found the good stuff! Come on!

Tells me you loved it!
Love
Shows your friends how awesome you are.
Share
Makes you look smart to your followers.
Tweet
— More Writing —
Home
The letter for March 20, 2016
Run.
Four years after a big fall, I've found my feet again.
A Little Bit of Everything.
As the lockdown has stretched on, I've found myself fascinated by the variety that's been sitting here, right under my nose.