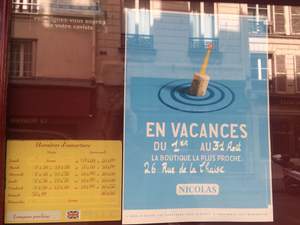 One of the most iconic and well-known attributes of French life (and most mocked by other places) are the six weeks of paid vacation.

The mockery's easy to explain — jealousy is a pretty normal human trait.

The reason for the vacations themselves is more complex.

But as I've watched an entire city pack up, place hand-written or printed out notes on the front door Returning August 31, Closed Aug 1 - Sept 7, and leave town, I've started to understand.

France has long been a mystery on the international productivity front. They take more smoke breaks, longer lunches, a staggering number of vacation hours, and yet are more productive per worker than almost any other culture on the planet. Per capita, even including all that time off, their GDP rivals anyone's in the world.

How is it that the French get to have their cake and eat it too?

It turns out the answer is simple - and it's a truth that's never been forgotten here.

The whole point of having cake is to eat it.

That's what cake's for!

You may think I'm being silly, but it really is all in that metaphor. Folks here aren't willing to give up enjoying the days of their lives for the sake of work.

And thanks to a few neat properties of our brains, that means that when they do sit down to work, they're more clear-headed, quick, and have better solutions to the task at hand than a burnt-out, 100 hour-a-week lawyer.

As we're increasingly discovering, not all time is created equal.

30 great hours with fantastic clarity and focus are in fact plenty of time to get serious work done, whether you're an architect, writer, or even a baker.

But they have to be great hours. Ones where you're rested, primed, and know what you're setting out to accomplish.

Priming is another key - there's fascinating research that indicates that when you've got a hard-to-solve problem, the best thing to to do is to outline the problem, be very clear on what a solution would need to do, and then wander off and do something else.

Your brain never stops working, and when you sit down again to take the problem on, - voila - more often than not, there's a simple and elegant solution waiting.

Remember all those breaks the French take?

But just like The Mexican Secret of Happiness, none of these cultural traits can stand alone. A culture where everyone leaves for a month for vacation only works if pretty much everyone goes, all at the same time. One where the shop owner might close up for a few hours in the afternoon or take a quick five-minute break at any point only works if customers can be patient, have a smoke, and accept that that's the way things work.

But when they fit together, like now - this behemoth of a city drawn quiet, taking its late-summer rest - they're beautiful.

Have a wonderful week,

p.s. The best thing I saw all week was this article illustrating that despite all the craziness we hear in the news, the world's actually great and getting better for everyone.