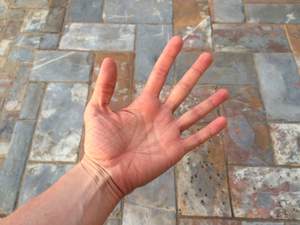 My (Other) Big Secret

Last week told you about my big secret, how being scared is what pushes me to take chances, live all over the world, and go after the life I believe in.

It's true. But it's only half the story. The other half of this live-all-over life?

I have white skin, blonde hair, a United States passport, and I'm a man.

I've been an obvious minority everywhere I've lived on these travels - but a minority assumed to have money, power, and access. When I open my mouth to speak a bit of Thai or Kinyarwanda, people are shocked.

Why am I learning their language?

They're also happy and amused at my hideous accent - but confused.

Everyone there is trying to learn English. It's the language of power, of money, and of access. Why would I learn anything else?

Being a white, blonde dude also means I'm pulled out less at security checkpoints, asked to go through metal detectors less, and everywhere I go, cops smile at me. No one's ever asked me questions while looking at my chest, or suggested, eyebrows wiggling, that they might need to "pat me down."

I've never been turned down for a job, given a second look on an application, or had my integrity questioned. Employers talk about the work I do, not how I'm dressed. And in situations where there's a bit of doubt, I'm always given the benefit of it. Always.

This weekend, as I was watching the Super Bowl, (you know, that giant American sporting event? No? It's ok. Nobody in Rwanda does either.) the halftime show came on.

And oddly, it generated a ton of insight.

See, Coldplay was playing, and their entire schtick was "we're all in this together." It was a fine, if slightly snooze-inducing performance. But halfway through, Beyoncé showed up.

Beyoncé's performance was Black and Southern. It was dynamic, powerful, soulful, and in-your-face. It wasn't "we're all in this together". It was "we are Black Americans, Southern, and that is a kick-ass thing to be."

Strange as this may sound, it really got me thinking.

I've talked before about race from a neuroscience perspective, and how we can use models of behavioral change to fight racism.

But there's also the fact that our brains are doing funny things without telling us, splitting the world into an "us" and a "them", and then setting them at odds.

We see this hard-wired "Us vs Them" in narratives we hear from all over the world. Europe vs the Refugees. Islam vs the West. Left vs Right. Even here in Rwanda, in the Hutu vs Tutsi history of how genocide happened.

As I've traveled and written, I've generally tried to take on this "Us vs Them" by showing that really, we're all the same.

To show that our brain is fibbing - it's really "Us vs Us", and that the "vs" is ridiculous. We're all in this together.

Then I saw Beyoncé. And I thought back to a conversation I had nine months ago with a friend who's worked on cross-cultural communication for the better part of a decade.

She said, "We're all the same is fine. But it means we have to be the same to respect and support someone else. Even better is we're different, and that's OK."

More than that, it's awesome. If there's anything I've learned out here on the road, it's that our differences are the best part of being human.

They're what colors in our humanity, gives us life, and makes us interesting. They create delicious cuisines, compelling music, and stunning architecture. And our differences are the very things that allow us fundamentally new ways to see the world.

Like fear, our differences are where all the good stuff is hiding.

So this week, I ask you to join me in short-circuiting our "us-vs-them" brains, finding some awesome, and broadening our worlds.

Let's each have a conversation with someone who is radically different than us.

In our conversations, let's each take time to listen, learn, and understand their perspective. Let's ask, listen, and then ask some more.

I've even heard a great question to start us off, from the founder of one of my favorite mindfulness apps.

Have a wonderful and eye-opening week.

p.s. The best thing I read all week was this powerful and heartbreaking photoessay that follows one woman's fight with heroin.