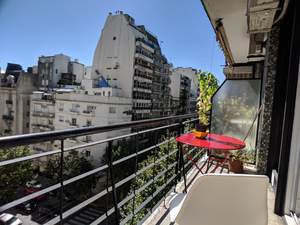 Actually, welcome is sort of the wrong word.

In truth, I arrived here over two months ago, needing to get out of New Zealand so badly that anywhere would do. Buenos Aires was a big city (which I love), it spoke Spanish (which I love) and it had amazing wine (which I love). So I took a chance.

When I left New Zealand, big parts of my life were in shambles. My relationship was going sort of ok, but my mental health was a wreck, my physical health was a wreck, I was drinking a bottle of wine a day (sometimes two), hadn't written anything in months, and Aunt Dee stopped by so often that a permanent divot was forming in the couch of my mind. Worse, the sense of curiosity and interest that drives me - the thing that makes me feel like me - felt dead.

I didn't know what to do about it, but I knew I couldn't keep doing what I was doing. So I bought a one-way ticket, booked an airbnb, and hoped.

Fast forward ten weeks, and even having lived through this, I'm staggered at how much has changed. I'm writing every day. I have two books in progress, have basically stopped drinking, and have gotten into properly good shape. I'm optimistic, curious, engaged. I'm reading, writing, living. (And yes, I'm still married. :) )

I'd love to tell you that it's all because of the tango. Or the passion of Argentina. Or the way the brightly-painted buses here inspire me.

It's because of the solitude.

Truth told, I don't actually get out into the city but a couple times a week. Sure, I live in apartment with a big window down to the street, and the city spills in, relentless, day and night. But out out? Exploring? Less often than you'd think.

But what I do have - in spades - is empty space. Space to sit and think and feel and make sense of my life. To be curious and wonder and observe. To hear the quiet voice of a new piece of writing show up, to press it down, pen to page.

And for me, it's been a godsend.

Four centuries ago, Blaise Pascal observed, "All of humanity's problems stem from man's inability to sit quietly in a room alone."

And here, in the quiet of this apartment, with only the hum of a fan and the subsonic rumble of diesel engines on the street below for company, I think he may have had a point.

Ever since I began these letters - almost five years ago, now - the nomadic life I was living meant that I had as much solitude as I wanted. Early on, I'd even adopted this idea as a mantra-in-a-question. "What if I could have so little interaction with the world, that all of it could be full-hearted?"

For almost two full years, I lost sight of just how important solitude was for me. And though I'm sure I'll lose track of it again someday - today, I am so so grateful to remember.

See you next week,

p.s. The best thing I saw all week was actually a small part of what helped me decide to restart the letters. It's this beautiful video about one wasabi farmer in Japan, and living a life that's true to yourself.

Tells me you loved it!
Love
Shows your friends how awesome you are.
Share
Makes you look smart to your followers.
Tweet
© Ink and Feet, 2019