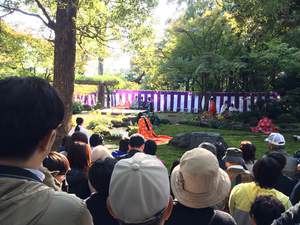 This past Thursday was Culture Day here in Japan - a nationwide celebration, filled with every kind of event and art form imaginable.

As I looked through the celebration calendar here in Kyoto, one event caught my eye. A 1,300-year-old tradition called Kyokusui-no-Utage. On paper, it looked an awful lot like a poetry slam.

As I mentioned a few months back, poetry was my first love, and its spoken form holds a special place for me. I've actually spent some time on the poetry slam stage, competing a few years back - it's an art form that resonates with me deeply, and I love it in ways I can't really explain to people who haven't been bitten by the bug.

You know that obscure thing you're really passionate about that everyone's eyes glaze over when you tell them about it? It's like that.

So Thursday afternoon, I made my way south of the city to a temple, and found the garden where this Kyokusui-no-Utage was held. And as I stood and watched it unfold, I couldn't help but laugh and marvel at the common threads between all the things we create.

Yes, the Kyokusui-no-Utage is deeply infused with Japanese culture. It's intertwined with Shinto ritual, takes place in a temple garden, and has loads of gorgeous formality and ceremony dripping over it. It's staggeringly beautiful.

But at the heart, it works like this: Six poets are given a topic. They then sit down, compose poems within the same rules, and drink some sake as they go. Then, the poems are performed for the whole group over some music, a winner is picked, and the champion drinks more sake and composes a few victory poems.

Swap the sake for another spirit, and this same scene could be happening this weekend in New York City. Or Paris. Or Mendoza.

In fact, it's hard not to believe that the origins of both traditions weren't largely the same - a group of poets got together on some rainy night, busted out a bottle of liquor, picked a topic, and battled over who could write the best verse.

Late one night a few months ago in Mendoza, Argentina, I walked with a friend across town, passing through the city square. It was probably one in the morning, but there, gathered in the frigid air around the central fountain, was a group of young men and women, standing in a circle. A nearby boombox lay down a simple, rhythmic beat.

In the middle of the group, two figures stood, battle rapping. Trading lines of poetry back and forth around the same topic, trying to see who could make the best rhyme.

Wherever I go on this planet, there we are.

There are stories we hear and tell — about nations and races and languages and ethnicity. But the more I travel, the more it seems like a different story is what's really true.

It's just us, here against the stars.

Have a wonderful week.

p.s. The best thing I saw all week is a video that's certain to bring a smile to your face. See, there was this dog whose very favorite toy was a green gumby. Then one day, as a surprise, his owner dressed up as a life-sized version of the toy. Epic joy ensues. :)