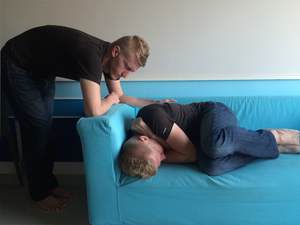 How To Help Someone With Depression.

Before you do anything, let's take a minute and get your head right.

If you don't struggle with depression on a regular basis, or haven't previously spent time questioning your intentions, motivation, and actions on how you interact, I can promise your head's not right.

Worse, taking action without getting your head right is usually worse than not acting at all. Seriously. Nobody wants that, especially you. You're trying to help - you're even reading this article! Don't worry, you can help - and you will.

But first, we're gonna take a minute, and get you the right perspective.

Take a few moments, and put yourself in the following shoes.

You wake up one morning, and wonder if you have the flu again. You're zapped, and even getting out of bed seems hard. You think about the day ahead, all the meetings and appointments and people you have to see, and you wonder how exactly you're going to do all of that with the energy level you have. Getting out of bed is hard enough. Meetings are impossible.

But, you're caught by finances. You're already out of sick days. If you don't get out of bed, you won't be able to keep your job, pay rent, and then you'll be out of energy and homeless. By sheer fear and courage alone, you get up.

You skip your shower. That's hard. You shove whatever food requires no energy to make into your mouth, and you get to work.

Your 8-hour day feels like it's closer to 18. By the time it ends, you're barely standing. You make it back home, and collapse on the couch. You feel zapped, off, and sometimes weird, dark thoughts stop by. You find something that eases the tired and darkness. Maybe it's tv. Maybe it's a beer. Maybe it's just sleep.

This keeps up, day after day. For periods in your life, it goes away. But eventually, it comes back. You keep notes. Have guesses and half-baked clues, but you don't really know what causes it to come, or what causes it to leave.

Somewhere along the line, you figure out that this particular set of things is called depression, and that makes you feel like shit. Depressed people are broken. They're people who can't see that it's sunny outside even when it is. They're social rejects with clouds over their heads, bringing people down.

At some point though, on a particularly bad spell, you realize you're stuck. And you don't know how to get out.

So you reach out. You tell someone you trust, "Hey, I think I'm feeling a little bit depressed." It's a massive understatement, but you don't want to scare them away.

Now your head is getting towards right.

That is what the person who just told you they were feeling a bit depressed has just been through. Their reach-out is a monumentally brave and difficult and terrifying thing.

That is the moment you find yourself in.

Intense, right? It's okay. I have some really good news. You can totally help, and it's easy.

The best response you can give someone who is fighting depression is this:

Oh, geez, that's gotta be so hard. Thank you so much for telling me - I know that was scary and hard.
I am your friend. And because I am your friend, I need to tell you two things.
1. I am sitting like a bump on a log by your side, and we will get through this.
2. If you want to share, I'd like to hear what it's really like. Even the hard parts. What's today been like?

Here's why it works.

If you're a heart person, and that makes sense, that's all you need to know. You can totally skip the rest of this essay. But in talking to lots of folks about this, I've learned that for more logic-oriented people, understanding why is really helpful. So here's why that approach works, and is so effective.

Because it's the right response for your role.

Some people have pointed out: "but it doesn't address the root cause!"

That's true. But the middle of a depressive episode isn't the time to worry about root causes. That's like talking about chainsaw safety while you have a severe leg wound. Yes, chainsaw safety is good. But maybe tend to the leg wound first.

There are lots of things like behavioral activation and the pretty-kick-ass ACT framework and loads of cognitive science and psychology that can have really positive long-term impacts on depression. But those are long-game solutions.

But what about things that I know would actually help?

This came up from people who do struggle with depression, and wanted to share the things they've learned that help them. Valid. But, there's a time and place where it's appropriate. Here's how you'll know it:

When the person asks you, "Hey, you got any ideas on how I could take this on?" That is your cue. If you haven't heard that, sit, ask, listen.

Here's why - by simply sitting, asking, and listening, you are giving a person who feels fundamentally disempowered by a weird thing happening to their brain a sense of control back. Treat their life like their car. Only drive when you've been asked to.

Note that keeping all those great, helpful, well-intentioned ideas in will not make you feel any better. But it will massively help them. Why?

Because you neutralize the toughest thing about depression.

Depression is massively, massively isolating. People who struggle with depression typically have no one they can safely talk to about the monster that's eating their life.

Not so with depression. There's a huge stigma, nobody understands, and when people do engage, they're generally jerks about it. "I don't know why you have the energy-sucking flu, dude. I mean, you have an awesome dog."

Yeeeah. Sense makes that does not.

See, when you're in a depressive episode, one of the most helpful things is to be able to tell someone, "Soo, I have this weird energy-sucking flu and I have no idea when it's leaving and it sucks, and side effects include some really crazy thoughts that I don't want and have no control over."

— and be heard. And recognized for the full human person you are. And have them say, "Shiiit, that suucks. Fuck the energy-sucking flu. That is some serious bullshit. What are the crazy thoughts like?" And then being heard.

I have news for you. Depressed people generally know they're crazy thoughts. We're more aware of the ridiculousness of the whole thing than anyone we're talking to - we just can't do anything about it. Having someone just listen when you tell them, "yeah, and sometimes I have these thoughts about jumping in front of trains," - and both of you acknowledging that those are some crazy fucking thoughts makes the person with depression feel sane.

They are no longer tied to their thoughts. The thoughts are a symptom of the crazy energy-sucking flu, and you know about it too, and seriously, WTF kind of flu is this that gives you crazy thoughts? That's some bullshit.

This leads to a third point, which is what the best systems like ACT are really built on:

Depression itself isn't actually that bad. It's the damn side effects.

However, if you're connected to awesome people who listen, connect, and treat depression like it's just a normal thing, something magical happens:

One that your friends know about, isn't contagious, and mostly, is annoying and manageable.

Whether you struggle with it yourself, or you're an awesome friend who helps out your friends who do, please talk about it, openly. Treat depression like it's the flu. Nobody whispers she's got the flu. It's the damn flu. It's part of being human. For some people, depression is too.

Interact with it, full voiced, and talk about it like it's normal. Because it is.

Note: Thanks to the overwhelming response to this post and its companion piece (a million readers from 193 countries?!), I've actually written a book that covers this and a whole lot more, with the same honest tone. 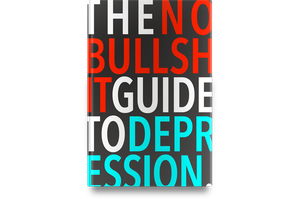 It's called The No-Bullshit Guide to Depression, and you can check it out here (or at your local bookstore!)


Also, if you're dealing with depression right now and money's tight, click here to learn about getting a copy for free.

Tells me you loved it!
Love
Shows your friends how awesome you are.
Share
Makes you look smart to your followers.
Tweet
— More Writing —
Strung.
Something ties it all together.
2016 and the Amazing Year Ahead.
The letter for January 3, 2016
Chiang Mai is Boring.
There's organic quinoa, a decent nightlife and arts scene, affordable housing, and a really walkable city. And that's the problem.