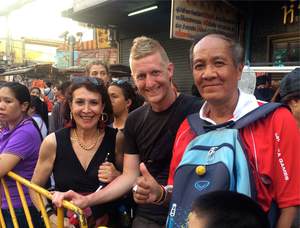 Chinese New Year in Bangkok. And dragons. And stories.

And after 10 hours of standing waiting by the parade route, the dragons never came. So instead, I'm going to tell you some better stories. About the people I met.

There was my friend Mary Who technically I didn't meet, but did get to have the most awesome experience with. If you ever get the chance, do this:

Mary got to walk all through Chinatown, see the drumming, the ceremony, the chaos and the glitter. I got to talk about it, and share it, real time, as it happened. It was lovely. If anyone else wants to do this, let me know.

After I talked to Mary, I eventually found my way to the parade route, and started standing. And meeting people.

There was the girl from Germany My first standing companion. The most open-minded and curious of anyone I talked to that day. She took in the scene, even its absurdities with a sense of wonder, awareness, an I wonder why that is, always assuming that there was a good reason.

There was my friend the policeman Watching the police here was an interesting arrangement. There were local city cops, working crowd control. There were royal cops, in similar dress, but with gold insignias. Then there were the men in suits, with earpieces. The pecking order was clear, and there were moments when everyone knew that yes, we were under martial law. Just to be clear.

My friend the policeman helped the group of us know what was happening, what was scheduled when, and that yes, it was on Thai time, so really, who knows.

There the 50-year old man from Thailand Who loved talking about his country, the cities, the sights. His son was spending a year studying abroad in a college in Idaho. He was charming, friendly, quintessentially Thai. He took selfies and pictures of the parade route. He convinced our friend the policeman to take that group shot. I wanted to hear more about him, his life. But then I was introduced to someone else.

There was Caterina, from Italy Caterina taught me some of the most delightful Italian words (did you that the word for the @ symbol in Italian is "snail"?) I was introduced to all manner of Italian hand gesture - many more important than talking, some hilariously rude. I was told that both of the following are true: 1) there were 1,000 words for cock and pussy in Italian, and 2) the Italian people weren't having enough sex and the population was dropping. All talk, those Italian Stallions.

Then we got on to her. Divorced. Not even for another woman. Had another man at home who'd been waiting 10 years to tell her, madly in love. Another man in Thailand. I'd be surprised if it were just those two. She ranged from desperately sad to giddy. A passionate, a careening whirl of emotions just out of control. It was impossible not to be charmed.

There was the Princess The woman the Thai people and I stood hour after hour to see. There's a lot that's complicated about Thailand's politics, and given that I'm a guest and that how they choose to run their country is none of my business, I'll leave the deeper discussion out. But what I will say is this.

Every person across the country that I've talked to adores her. There are other people they don't adore, but the Princess is by every accounts a fantastic human being, and deservedly beloved.

She's also (I think) in her 60's. Which is a beautiful juxtaposition, with the way "Princess" is thrown around in the English language. Want to know what a real Princess looks like? That lady.

As her open-sided car passed by, she felt like a lovely human being.

There were the really annoying Americans Two in particular stood out. Loud, tall, yapping. After the Princess passed by, they shouted at each other, "That was fucking it?", then launched into a sarcastic monologue about how amazed they were, and how it was so worth the wait.

Fuck those guys so much. If they'd shut their annoying noise holes for even ten seconds, and actually looked around, they would have seen exactly what they were missing.

There was the girl who wouldn't stop smiling for days. Next to me (and adjacent to the Americans) was a girl who looked like all her life dreams had just come true. Like she'd gotten to see Santa Claus and The President and Oprah all in one. This was probably the first time, and if she wasn't from Bangkok, maybe the only time she'd ever get to see the Princess.

As the Princess passed by, the warmth and love and cheer from the croud (not racuous but tender, heartfelt) was real. They didn't share that same love with any of the buses of dignitaries that followed in her wake.

But The Princess - their Princess - was a woman who genuinely worked tirelessly out there, for the benefit of the people of Thailand. Someone with power who cared. That was who this girl had gotten to see, in person - not even 15 feet away. That is who the Americans missed.

There was the girl from Poland I met at the Nutella and banana crepe stand. On my way back home, I finally said yes to the crepe stand I pass almost every day. Nutella. Banana. After a day of conversations with strangers, there was nothing to do but to strike one up with the girl who ordered just after me.

Today was her first day in Thailand, and she had a month, all around the country, ahead. I felt excitement, wanted to hear her plans, but also tell her everything about this country I've grown to love.

It is a wonderful, wonderful place. The Thai people, all of them, deserve nothing but deep happiness and the very best.

Happy New Year. May you have health and deep fulfillment in the year that lays ahead.

May the people of Thailand have the same.