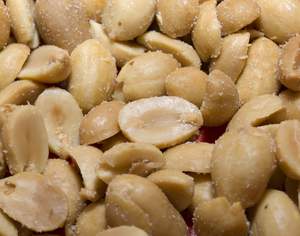 How to Eat in Thailand with a Peanut Allergy

This is supposed to be one of those scariest-ever scenarios. You're in a foreign country, the food is teeming with peanuts, the language is impossible and tonal and OMG SERIOUSLY YOU WILL DIE.

It's really easy to avoid peanuts here - you just tell whoever you're buying from that you're allergic, same as you would in your home country. I'll even tell you how to say it below, in a way you'll be able to remember, easy.

The even better news is that rather few Thai dishes contain peanuts! Pad Thai, the most famous example, just has peanuts sprinkled on top that restaurants are happy to not put on, and most of the other peanuts I've run into are in peanut sauce, into which you simply avoid dipping your food. Things are also generally made to order, so making tweaks is easy.

If you've eaten Thai food in your own country without dying, you'll be fine here. Just like home, everyone knows what a peanut allergy is.

How to say "I'm allergic to peanuts" in Thai

Some forums recommended that you print out a google translation of a long phrase indicating certain death and peanuts and oil. I did just that. It worked fine. However, a week into my travels, I showed the card to a new friend, and they said, "google translate?" and laughed. They then also told me how to properly say I'm allergic, and it's super easy.

"But how am I gonna remember that???," you ask. Simple. There's this story of how you die from peanuts.

You're in Pompeii, eating peanuts as the ash rains down (why not, at that point), and as the peanuts kill you, right strolls by the ghost of confederate General Lee, singing. You roll your eyes, realizing you'll die listening to a Lee song.

pompeii, to a lee song.

That you can remember. You probably already do.

Easy-peasy. Now get out there and enjoy some of the best food on the planet!

Pompeii, to a lee song should get it done for you, assuming some semblance of normal English accent.

However, here's a phrase that rhymes, if you want to double-check pronunciation:

For the ladies, chawn rhymes with john.

If you're concerned about oil (in my experience, a non-issue), the Thai for "peanut oil" is nam man too-eh lee-song. And, really convienently, the Thai for die, is die. Seriously. If you say pompeii to a lee song, then point at yourself, and say "die", I promise people will get you.

Here's a few bonus pieces of advice that seem pretty obvious, but sometimes get lost in the strong fear of the dyings.

You're talking to another human being, just like you've done since you were a kid. Pay attention to comprehension. If someone looks like they didn't understand you, they probably didn't. Try again. If you see the light-bulb face of recognition, you're golden. In my experience, every single time I've said it, people have nodded, and had the light-bulb face. Your mileage may vary, but use your common sense. Communicate just like you do at home.

Tailor things to your level of allergy.

Plan for the severity of your allergies. Mild anaphylaxis is way different than a speck-of-peanut-dust-will-kill-me. This comment over at Lonely Planet lays it out pretty well. (Though I disagree strongly with #4.)

Do your homework on what your particular peanut reaction looks like. There's a lot of fear that blinds people to what an actual anaphylatic reaction would be like. Read up on it. There are even a growing number of doctors doing peanut desensitization treatments, of which one part is a "challenge" - in a controlled, well-protected environment, finding out exactly what your reaction is like. This can take a lot of the fear out of the discussion. A level head is a good thing. Understand your risks, then take the appropriate precautions.

Use your common sense.

Trust your body. If you're like me and every other person I know with peanut allergies, you have a weird psychic sixth sense about them. You know for reasons you can't explain when something has peanuts in it. If your warning bells go off, trust them.

Know where you're going. Are you going to a tourist haven with lots of medical infrastructure, or well off the beaten track? Adjust your plans, and the level of communication you'll need accordingly.

Finally, carry your damn epipens, kids. Or, better, carry an Auvi-Q. Those things are tiny and awesome.

Mostly, enjoy all the good eats!

Did this help you? Help me out by subscribing to my letter. It's awesome, contains stories from my adventures living around the world, and people tell me it enriches their lives. :)

Tells me you loved it!
Love
Shows your friends how awesome you are.
Share
Makes you look smart to your followers.
Tweet
— More Writing —
Don't Concentrate, Cultivate
What I learned at a 700–year–old Japanese Zen Temple
Welcome to...
The letter for July 3, 2016
2020, and The Year Ahead :)
A look back, forward, and a personally really exciting announcement.