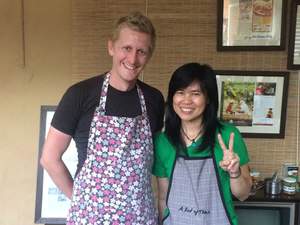 I had some of the best Thai food I've ever eaten today. And I made it.

(Yes, there are pictures.)

It's all thanks to the woman in that picture above, Yui.

Yui is one of the top cooks in Thailand. She's been featured on Gordon Ramsay's show and others, has offers to come consult from top restaurants across the globe, and yet for right now, still teaches small, 8-wok classes at her home in Chiang Mai.

She's a powerhouse of a woman, probably one of the best scientific minds of a generation, equally comfortable working through logic problems, law, business plans, or cuisine.

Her insights were keen, the sort that smack you upside the head with a why didn't I think of that? One guiding principle pulsed through everything she taught us in the kitchen.

If there's a problem, figure out why it happens, then do something different.

From my rusting woks at home to soggy deep fried rolls to when to add water during a stir fry, her advice was always grounded, inquisitive, and clear. You'd ask about a problem. She'd tell you what caused it. Not the solution. What caused it.

"I tell you so many things in one day, you can't remember them all," she said, "So I want to make you gain understanding. Then, later, you can figure them out again for yourself."

There's a concept called 5 Whys, developed by Sakichi Toyoda at Toyota [1], that requires a problem solver to ask the question "Why?" five times in succession, before taking any action. Once five whys deep, the real reason a problem keeps cropping up often becomes apparent.

One gets the feel that Yui's been asking 5 Whys her entire life. Not content to just learn the recipes from particular Thai cooking disciplines, she's performed archaeology - digging up old cookbooks, comparing the recipes, the states of the ingredients at the time they were written - "1 tablespoon of salt from a recipe 50 years ago is not 1 tablespoon of salt today" - and understanding each dish, inside and out. What makes them tick? How do the ingredients relate to each other? Then, starting from all of that knowledge and history, she writes her chapter.

Her hands dance in the air as she draws out the taste: "One-eye closed salty, then sweet, then a little sour, then spicy." That's what the sauce for a Pad Thai should taste like, ingredients be damned. Use what's local. Use what's near you and current - hell, use a blender - just make it taste like that.

More than great recipes, more than learning to make truly delicious food or what's really happening when I stir fry - taking this class let me be around a great human being. Someone who inspires me to be my best, to squeeze every drop out of the faculties I've been given. Someone who simply can't be bothered with average.

If you can get to Chiang Mai, come, and take one of her classes. As much as she's got a good routine here, I just get this feeling - this city can't contain her for too much longer.