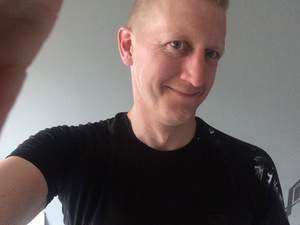 It's not a fight.

The Songkran I want to tell you about isn't the one that's in all the token newspaper stories, full of water-soaked photos of wet tourists, beer, and people dancing on tables. (That only happens on Kho San Road, the only place in Bangkok I'd tell you to avoid.)

I want to tell you about the real one, the Songkran that happens in back alleys in Bangkok and all across the country.

It's is about coming home, washing away the past year, and like pretty much everything here, it's about kindness.

I walked out my door on the first day, and a man on the street sized me up, then told me with concern, nam maak - lots of water. I nodded that I knew, and he wished me on my way.

I turned the corner, and there were three men and two boys standing next to a giant barrel of water, bowls and squirt guns in hand. I smiled, and within seconds, they'd drenched me to the bone.

Some context is important - Songkran takes place during the hottest time of the year, in a very, very hot place. The heat index in Bangkok is regularly pushing 50°C (120°F) during April, and the prospect of being completely soaked as you walk the streets is actually quite lovely.

Over the three days, I wandered all across Bangkok, from the more touristy and super-soaker filled streets near Silom to back alleys and neighborhoods where I was the only farang anyone would see all day.

By the time I made it home each day, my face was covered in chalk paste, I was still dripping, and I was smiling, wide.

Two particular dousings tell the story of why, so well.

The first was near Lumphini Park, as a young man in his late teens came up to me with a bucket full of chalk paste and a smile.

In America (and a lot of the West I've been in), what would follow would be a rough and mischievous covering of someone's face, like the cake smashing traditions of weddings.

But what actually happened was gentle and kind. He just softly brushed the chalk paste onto my left cheek and neck, smiled, and walked away. The feeling wasn't rough or mischievous, but respectful and well-wishing.

Later, on a deserted stretch of road, I came across a man standing next to a giant red cooler, filled two thirds up with ice water. He smiled, I nodded, and he dipped the bucket in, walked over, gave me a hug, and dumped it down my back.

It was cold. Really cold. But the hug meant that he was actually dumping the ice water on himself, too, and underscored what the gesture really was - one of giving. It's hard to wrap words around what that moment was like, sharing a real hug and a bucket of ice water with a stranger on the side of a deserted, blistering street. Beautiful is the best word I have, but it still isn't enough.

The reasons behind using water and chalk are centuries-old symbolism around washing away the past year, and purification. At its historical core, Songkran is about washing off last year's hardships and bad luck not with fierce scrubbing, but with tender care.

These aren't moments, as we might imagine in the West, of dousing strangers with water for fun, an undertone of violence satisfyingly present. They're moments of shared humanity, of everyone needing a fresh start, feeling hot from the blistering heat, and enjoying the simple pleasure of playing with water on a hot sunny day.

That was why I was smiling, as I dripped back to my apartment. Minute after minute, hour upon hour, I'd had the shared experience of our common humanity affirmed, as I traversed the city.

All of us, no matter where we come from, not so different.
All of us, every year, grateful for a fresh start.

So this week, I want to share that same spirit of Songkran with you.

May the things that don't serve you wash gently away. May you be left with what you really love and need.

p.s. The best thing I saw all week was clearly Songkran. But the best thing I can share is this article about something that becomes stunningly important, as soon as you think about it. Read: What pronouns should we use for animals?