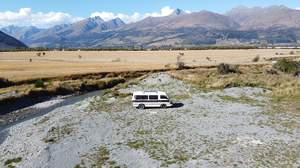 I've been living in a van for two months now, and if I had to boil the difference between this and my life before down into four words, they'd be:

I don't mean don't mean less bullshit like "there are less random meaningless tasks that you have to do" - there are probably more of those.

And I don't mean more real like "I'm out here making a fire from two sticks every night, after hunting and foraging for my food." I have a refrigerator, and on the whole, I eat less fresh food than I did before I moved into a van.

Let me try to explain.

Everything in my day - everything - has a cost. Want a drink of water? That'll mean a trip to find a dump station and fresh water a little bit sooner. Want to use the restroom? You're either walking to one, or you'll have to again visit that dump station a bit sooner. Want some food? If you make dishes, you'll need water to clean them - and then you guessed it: dump station.

Using a laptop means keeping an eye on the sun. Eating packaged food means finding places to dispose of the waste. Taking a photo or video means having to download and log it later, and figure out where to keep all that footage.

There are also bonus costs that are just a part of living. Brake light's stuck on? Time to learn how brake switches work, and get 'em fixed. Cold, windy night coming? Better find a spot with a bit of shelter, get the extra blankets out from under the bed, and don't think about having a drink. Just woke up in the morning? Time to fold and pack the sheets, then convert the bed to a table - before it's time for coffee.

The result of all of this is that if I'm doing something, it's because it needs doing, or I really want to do it. Nothing else clears the bar.

A few years back, I remember being excited about a new app that gamified healthy life habits. You did good things, you leveled up your little virtual self. It was a fun idea – and it seems absurd right now. There's a sun and moon and trees and water, Steven. The engine is still leaking oil. The battery's half full. You have two ideas for pieces rumbling around in your head, and those clouds are aching for a timelapse. Why were you trying to use a tiny little screen to motivate you?

There's something out here. Something to having all the accoutrements of life stripped away, to being on the edge of society, facing two things at all times: humanity on one side, nature on the other.

Me, in my little van, on the sliver of line dividing them.

Have a solid week,

p.s. The best thing I saw all week was the excellent SciShow's breakdown on sustainability of paper, plastic, and those reusable bags we're all switching to. As with many life cycle analyses, the answers might surprise you.

Tells me you loved it!
Love
Shows your friends how awesome you are.
Share
Makes you look smart to your followers.
Tweet
© Ink and Feet, 2021