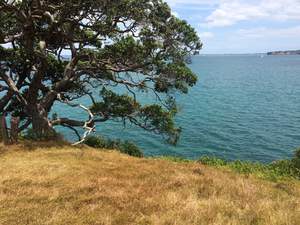 Last week, I wrote about taking on 2017, full-hearted, jumping, letting it have its beautiful way with us.

In the week since, has it ever.

I'm writing you this morning from Waiheke Island, a sort of fairy-tale place made of hills and wineries and beaches and turquoise waters filled with reef-life and the most adorable oyster-catcher birds.

I'm still, honestly, not quite sure how I got here.

It's been one foot in front of the other. It's been say yes. It's been honestly, hard to explain or describe.

The last seven days have felt like two months, and I have trouble answering really basic questions like how long I've been here, or when I'm planning to leave.

When I first moved to New Zealand in mid-December, I struggled. Mightily. For the first time in two years, everything and everyone around me was in English. As I've traveled, my brain has adapted, sucking in every scrap of information, then working non-stop to sift through the jumble and find meaning, figure out cultural norms, and make sense of it all.

Here, I understood everything, and it was too much to cope. I also couldn't make heads or tails of Auckland. Was it a big town? A small town? The suburbs? Were people nice? Sort of passive aggressive?

I tried to fit things here into the experiences I have in other English-speaking places, and all my attempts failed.

But as things have slowed down, and the country has started to unfold, it's all falling into place.

New Zealand is a sort of alternate reality version of the English speaking world. All the things you might know coming from somewhere else are here, but they're not in the spots you expect. It, like every country on earth, is self-contained, living by its own set of rules, culture, expectations.

My mistake had been in thinking because it seemed familiar, it was familiar. But it's not.

This alternate reality stretches all around me, in hypothetical questions turned real —

‐ What would an ecosystem look like without large predators? ‐ What would the relationship between a first people and colonists look like if (at least) the start of the relationship was built on mutual respect instead of exploitation? ‐ How might a language work if you had a deep visual history, geographically spread and clustered population, and no need for a written alphabet?

I only have scratches on the surface of these and many more questions, but this place, and its mix of familiar and unfamiliar has started to wrap itself into and around me.

Unstringing things I was certain were true. Offering new perspectives, futures, new paths up the mountain than I'd considered.

I am so excited to explore this land, the people, learn Te Reo (the Māori language), and uncover it in the time I have ahead.

I am so, so thrilled to get to take you with me.

Thanks for coming along on the ride. It's gonna be a good one. :)

Have a great week,

p.s. The best thing I read all week is this fantastic piece over at Vox - it tackles, in a stunning and visual way, a wonderful disconnect: despite the fact that almost nobody thinks it's true, the world is absolutely getting better.

Tells me you loved it!
Love
Shows your friends how awesome you are.
Share
Makes you look smart to your followers.
Tweet
© Ink and Feet, 2017