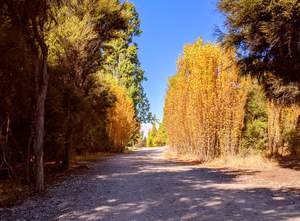 The first morning I woke up with frost on the van windows, I bought a blanket. The sun came back. The days were warm, the nights were cold. As a cold-sleeper, I was set.

Until shift, drop. The days drew short, the clouds rolled in and I found myself layered up and still cold at three in the afternoon.

I'd planned to head back to my favorite spots in the South Island. Another few weeks in Golden Bay. Watch the leaves flitter away in Wanaka. Have a few more star-filled nights at the foot of Aoraki.

But as the only source of heat in the van, it very quickly became clear that my plans didn't matter: it was time to start heading North.

So I've turned, spending a few days at the dolphin and whale-filled coastline in Kaikōura before I head up the coast. Back to the same ferry that brought me to this island. Back to the North Island - and a lot of uncertainty.

It's somewhat fitting, with how much my time out here in the van has been defined by a reconnection to nature, to the world around me, that it's the seasons that finally turned me back.

Squeezing the last drops out.

Have a seasonal week,

p.s. The best thing I saw all week was this fascinating deep-dive into the writing systems of West Africa.

Tells me you loved it!
Love
Shows your friends how awesome you are.
Share
Makes you look smart to your followers.
Tweet
© Ink and Feet, 2021