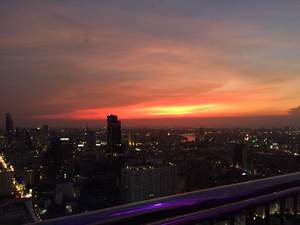 This is my last letter from Bangkok before I get on a plane to Argentina, and I'd planned to write to you about the bittersweet nature of loving a place and having to leave (and maybe even about love itself.)

But in the process of saying my goodbyes, and connecting with the people I've grown to know and love here, a different kind of story came and smacked me across the face.

It takes place a few months ago, at my favorite little hole-in-the-wall restaurant here. One day, around noon in the middle of February, a group of twenty men showed up with knives and started threatening the owner - a woman in her 60's, working alone - that they were going to kill her and destroy the restaurant.

She closed up all she could (every home here has iron bars on the front facade), and called her family home. The front part of her shop was trashed, her cutting board destroyed. She and her family escaped physically unharmed, but shaken.

The angry mob? They were from her next door neighbor, who'd opened a competing restaurant.

The apartment where I've stayed in Bangkok is relatively new, in an older section of town. I liked it because instead of being in touristville, I'm in a normal Thai neighborhood with families, kids, little shops and hole-in-the-wall, delicious places to eat like my friend's.

I don't really do the tourist stuff. I learn the language, get to know people, and try to understand a place and the people on their terms.

But I am gentrifying this neighborhood.

Most times we hear the word "gentrification", it's as a concept, neatly shrouding over the fact that it's actually about people.

Gentrification means that rent along my street for a single apartment has gone from 800 Baht to 8,000 Baht in the past five years.

It's meant an influx of foreigners, many on vacation with a currency advantage and money to burn. For nearby businesses that cater to foreigners like restaurants and shops, business is good. (And it has to be, to keep up with the rising rent.)

But for other spots, like the place across the street that manufactures galvanized steel pipe brackets, that rent increase hurts. Nobody comes on vacation to buy bulk pipe brackets.

That pressure - the rising costs, the raised stakes, the need to bring in ridiculous amounts of money just to stay in your home - is what led to those mobs.

My friend's restaurant is doing well - and it should. The food is amazing, the prices are fair, and she's a person who always brings a smile to your face. Add it up, and when people eat there once, they generally keep coming back.

The restaurant next door, despite bigger signs and lower prices, has watched people - foreigners - walk past them and into my friend's, day after day after day.

Over months, the tension built up until desperation took over, and the next thing you know, armed mob.

Let's be clear. Anyone who's going to call in an armed mob is crazy.

But it never happens without the gentrification. If it's just a quiet Thai street without any farang, the competing restaurant probably never opens. There isn't enough demand to support two identical restaurants, side by side. They'd just have found another way to make a living.

The unhinged competing owner is the spark - but the foreign money is gasoline soaking all over the scene.

My hands aren't clean. I helped create this.

Just by slow-traveling the way I do, I'm a force for gentrification and cultural dilution, everywhere I go. It's the truth of income inequality, of a funny world we've all been born into that confuses people and places.

Am I doing good things too, by traveling and sharing these stories? Yes.

One of the first people I really admired was a German conservation botanist named Rainer. I remember one of our first conversations, fifteen years ago, walking around late at night on the streets of Loja, Ecuador. It was my first international travel, and I was wide-eyed, idealistic, and sure that everything had a clear, clean answer.

We talked about how much he flew, the carbon impact of flying, and the damage it did to the very ecosystems he was trying to protect. He acknowledged the impact. On the balance, he said, I think I'm helping. I hope I'm helping.

He introduced me to the idea that here in the real world, almost all of our choices both do damage and make things better. You just hope, on the balance, that you're helping.

That's what I've got for you this week. No heartwarming tales of just how much and why I love this country, or the heartbreak of leaving again. Just a messy story and two dirty hands.

Thank you so much for coming along. :)

p.s. The best thing I saw all week was fantastic ray of sunshine, in the midst of the above. See, last week, the entire country of Portugal just powered itself entirely on renewable power. An entire country running, zero pollution. That too, is the humanity we're creating. :)