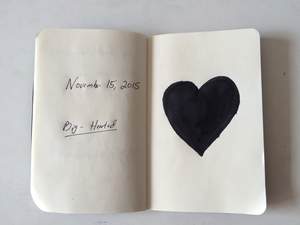 I had a letter all ready for you about my crazy adventure in the Colombian countryside last Sunday - and then last night, Paris happened.

I looked up, realized that Beirut had happened the day before that and Baghdad just prior.

Sat, staring at a blinking cursor, wondering what to write you in times like these.

I guess, if anything, it's just to tell again my experiences out here, living all over the world.

That people are good.

Every person I've met, even in the places I totally wasn't supposed to go, was a kind and generous person, and just like you and me.

Terrible people clearly exist, living in every country on Earth - and on days like today, we're reminded of their presence.

But they are not most of us.

And they do not decide what we will become.

We, the good-hearted majority, we get to decide what we'll do with our humanity, and what kind of world we will create.

Our hearts hurt, and they should. But we are also strong enough to simply be with the pain.

To not turn into monsters, too.

p.s. The best thing I saw all week, and spot-on for this moment, is this comic by the Oatmeal. It's about a plane crash, life, and us against the stars.

p.p.s. I'm also putting that intended adventure down below. If you'd like a good story to take your mind off of things and see some of that people are good in action, it's there for the taking. Until next week, be well.

The second time I broke my bike I was alone, somewhere in the Colombian countryside. No cell maps. No real idea where I was, just a bent-in-half deraileur, a back tire that wouldn't turn, and the memory of where our group had started from. And my intuition. That's important for the story. But I'm getting ahead of myself.

At 4am last Sunday, I got out of bed, made some coffee, then trundled myself across town to meet a group of strangers I'd heard about secondhand on Facebook.

We were headed into the Colombian countryside, to do mountain biking through a scenic landscape, eat awesome food, and plant trees.

That's why I signed up!

My day began looking for a group of bicycle-ish people near a huge mall, and realizing quickly that today, I was going to need my Spanish to be better than it's ever been.

I wandered around the mall, looking for the right group of people by a process of hideously flubbing greetings, and asking something like "is bicycle of tree?"

Somehow, thanks to the wonder that is the patience and kindness of the people of Medellín, I found my way aboard the bus, and navigated two hours of motion sickness punctuated by breakfast.

Breakfast, actually, deserves a special mention. We stopped in a roadside place, and because pretty much everyone else did it, ordered arepas and chocolate.

Arepas are a kind of corn tortilla, but only in the sense that they started made of corn and are flat. This batch was fried in butter until they oozed goodness, and then were topped with queso fresco - a fresh local cheese, not dense, a little sweet.

Along with them came a bowl (to drink) of chocolate - sort of like "hot chocolate" in a lot of places, but without all the sugar.

Yes, it's really as good as it sounds.
No, I don't know a better way to start the day.

We arrived in San Rafael, unpacked the bus, hopped on our bikes, and headed down the road.

All day, we actually biked down roads, but the terrain - as maintenance varied - was interesting and challenging. There were bomb-downhills though the middle of tiny villages, streams to cross, broken pavement turning to washboarded rocks, and long, unrelenting slippery dirt hills.

On one of these hills, I broke my first bike. Snapped the chain.

It bears mentioning at this point that I've been riding a bicycle for 30 years, have mountain-biked extensively, raced them, and have never once done anything worse to a bike than get a flat tire.

I stopped at the top of the hill with my new, chain-free bike, and waited for the rest of the group to catch up to see what the plan was. Immediately, bike tools were out, and a small army of strangers started turning my chain into a slightly smaller chain.

At one point we had 7 people involved, each with two hands busy. Mine were the least useful among them. All the credit is due to a couple of Colombian software engineers, an architect, and a few other professionals whose vocations I didn't catch.

A short time later, my chain was one link shorter but whole, my bike was set permanently into first gear, and our journey continued.

I limped into our lunchtime spot - an organic farm and arboretum of sorts, carved into the hillside. I filled up again on really, really good Colombian fare - all from food grown on the site - and then looked around antsily. I just hoped that I hadn't missed the tree planting.

I was in luck. Within a couple minutes, the whole group was rounded up, and we listened to the owner of the place tell us about about the trees we'd be planting.

Then we were each handed a baby tree.

Even the too-cool guys in the group changed their demeanor when they held their tiny tree.

There's something magical, a connection that we humans have and always have had with trees. When you're holding a tiny one in your hands, you can feel it.

My little tree friend got a lovely little hole to start growing in, and some well-attended dirt squished in around it. Everyone, to a person, beamed.

We headed back, and as I crested a bridge, my chain snapped again. I stopped, some people from the group helped me look for the pin, but it seemed hopeless this time.

One of the organizers insisted I take his personal bike, over my assurances that I'd be fine, and could walk back. I finally caved, and rode off ahead, alone.

I like being alone. But there was also a security blanket in having a group of locals (I was the only foreigner here - and maybe the only one for quite some distance.)

I pedaled hard, determined to catch the group up. At the few intersections I came across, I just took the fork that went back the way we'd come.

But after 30 minutes of pedaling, and after a morning spent at the front of the group and wishing we'd go faster, I still hadn't seen anyone. Something was up.

I stopped at a roadside restaurant that backed up to the gorgeous river we'd jumped in earlier to cool off.

Did some bicycles come this way?, I asked. About 15 people?

No, came the reply. Just this morning, going the other way.

I decided to keep looking. I got back on my bike, started up the hill, and shifted up one gear. The world exploded.

The back tire locked, and as I found my way off the bike, I saw the rear deraileur was turned and twisted in the way it never, ever should be.

I was now standing, somewhere in the Colombian countryside, with a busted bike I didn't own, and no idea where my group had gone.

I heard my 4-H survival skill training in my head. "When you're lost, stay put," they teach you. But they didn't have cell phones.

Somehow, I had emergency data working, so I whatsapp'd a friend back in Medellín with my GPS coordinates and direction, then texted the group leader for when he got back in cell service with my location, direction, and plan.

Then I started walking. In the hours that followed, I made it back to the first fork, and started asking questions. The man at a nearby store was sure the group had gone left, across a bridge, and I had vague memories of someone saying "Left" in a conversation I wasn't following about an hour earlier.

But every time I went to go left and cross the bridge, my gut and the ground I was standing on, said emphatically, no.

I listen to my gut.

I talked to more people, finding words until they turned into meaning, and leaning more heavily than ever on the kindness of the Paisa people.

One wonderful old man opened up his home to give me some water, making sure to tell me that it was clean water, safe to drink, and drinking some to prove it. He had a good Sunday afternoon drunk going, and I loved him.

Collectively, I figured out that it was possible (and maybe even probable, given the bike tracks I found) that the group had gone left, but going that way was more than double the distance to town.

Town seemed like the smart place to go, so I set my goal for where we'd gotten off the bus that morning, turned right, and started walking again.

I figured out that if I loosened the back wheel nut, the wheel would spin on the downhills - and if I didn't hit any bumps, the wheel would stay on. I headed North, traveling by a combination of walking up, sort of coasting down, and soaking in a staggering landscape for the next 3 kilometers.

As I climbed the long final hill before town, I heard a voice behind me. "Esteban!" The group had found me.

In the end, they'd wandered off somewhere down the river, relaxed, swum, gotten increasingly worried that I'd been kidnapped, and then headed back to town, hoping they'd run into me on the way.

For all our luck, they had.

There were narrow misses all over. At the first fork, they'd never turned left. If I'd overruled my gut and gone where every scrap of my knowledge pointed, I'd probably still be wandering the Colombian countryside, and there'd be a team out looking for me.

If they hadn't caught up to me when they did, my plan was to go back to where we'd started. But the group never went back there - our pickup spot turned out was somewhere entirely different. If they'd been ten minutes further behind me, I'd have turned, and would also have been hopelessly lost, this time wandering around a town two hours from where I live, with someone else's broken bike.

I learned two things that day.

First, and especially when I'm saying yes and taking a chance, trust my gut. It'll never let me down.

Second, even out in the Columbian countryside, where foreigners aren't supposed to go alone, people are people, just like us. Good, fully, at heart.

Have a wonderful week, filled with the exact kind of adventures you love, and know that out there, regardless of the news stories, the world is filled with good people.

Tells me you loved it!
Love
Shows your friends how awesome you are.
Share
Makes you look smart to your followers.
Tweet
© Ink and Feet, 2015