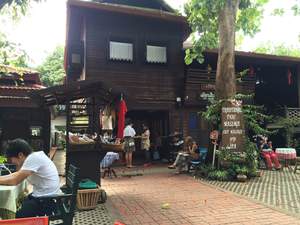 My Massage in a Thai Prison

Was really, really lovely. Wait, what, you're asking? Why did you get a massage in a Thai prison? Aren't there hundreds of massage places in Chiang Mai? Yes. There are. But none of them are this awesome. Before I can tell you why, let's get some quick misconceptions out of the way.

Thai Massage is different than you're probably thinking.

Unless you've had Thai massage before, I'd bet the ideas you carry about it aren't quite lined up with reality. Mine sure weren't.

Unlike oil-based western massage, in Thai massage, you're clothed the whole time. I was given some prison-issue massage garb (a bit weathered and large, but overall comfy), given a private room to change, and then led to a table in a room with several others. This is pretty normal for massage places in Thailand - lots of lower-body massage is even done in chairs, and massage parlors often just look like recliner sales floors - banks of chairs, wall to wall, half-filled with comfy people.

Generally, the technique is a mix of acupressure, therapeutic massage, and guided yoga. Spaces usually have plenty of light, and the feel is closer to a spa - keep everything clean - than a dark den. The reality here is rather different than the incense-filled, dim rooms of lore.

And while we're taking on misconceptions,

In the United States, our view is largely that prison is punishment. That they're largely, a bigger, badder version of being put in time-out. Our view is also - despite all the numbers that scream otherwise - that the prison system is working. But it's not. The proof is in a thing called recidivism - the likelihood that once you're been in jail or prison, you'll end up there again.

In America, where we have maximum-life sentences and the death penalty in many places, we're not doing a very good job. Our recidivism rate is about 77%, nationally.

Compare that to places like Norway, where the absolute worst jail sentence you can get is 21 years, and the recidivism is only 20%.

The difference? In Norway, they have a really strongly vested interest in making sure that whatever mix of circumstances and personality led you to prison are gone by time you get out. If a murderer is going to be released in 20 years, you've got damn good motivation to make sure they're well-adjusted by the time they walk out the door.

Without that motivation, in America, largely it works like this: person is booked into prison or jail, and while there, significantly improves themselves, their headspace, and their outlook on life. Then one day, when their sentence is up, they're walked out the front door with no support, no new resources or friends, and no extra skills than they had when they landed in jail. You can guess where they end up. And, as a bonus, they now have to check that "Yes" box next to have you ever been convicted of a crime. Think the job market's tough for you?

In my first writing workshop in jail, facilitating for Write Around Portland, I got to see this first hand. That workshop was probably the most emotionally wrenching thing I've ever gone through. Sitting in that room, the sense of inescapable was palpable. The guys would say, in their words and in their pieces, "In here, it's so easy, man. Everything makes sense and you know you're going to get out and make right by it. But then you get out, land in the same place with the same people, and you know it's just a matter of time until you're back." Very few of the men in that room were in jail for the first time. This wasn't dread or despair speaking. This was experience. They were stuck, and they knew no matter what they did, they couldn't get out.

The Chiang Mai prison works the way they should.

In this prison, women are given the opportunity to enroll in one of many vocational training programs: sewing, embroidery, mechanics, wood carving, gardening, massage, beauty, computing, and bakery among others.[1] In these programs, the women get to keep the money they earn - to help them find stable housing, food, and work once they get out.

In the last six months of their sentences, they're assigned internships with nearby businesses, re-integrating every day with what life will be like once they're released. At the end of their workdays, they walk back into prison. In all the years they've been running the prison, they've never had anyone take advantage of the system, or try to skip town.

Why? Prisoners are human beings, just like you or me. When you treat any person with respect and fairness, they will nearly always return the favor.

The prison isn't without its problems, and it's not a nice place to be - funding is way too low, and there's nowhere near enough space. On average, 17 women share an 8'x10' room with a single toilet and a ceiling fan. But despite all of that, they're succeeding.

Women are gaining confidence, healing, and finding ways to land on their feet and never go back. Some of them by becoming rather skilled masseuses. Which brings me to my massage.

Was fantastic. When I lived in the states, one of my favorite things was that I had a regular massage routine with, in my opinion, the best massage therapist in Portland (seriously, if you're in PDX, check her out.) From the trail half-marathons to the triathlons to parkour injuries to too much programming, she kept my body whole, connected, and grounded. It was the most important part of my health care, and I've missed it dearly.

Here in Thailand, after three months, I haven't had a massage. This, despite continuing to run, despite countless roadside offers, and despite more than 3 miles a day of walking here in Chiang Mai. Clearly, it was time. And never having had a Thai massage before, I wasn't really sure what to expect.

The massage itself was a mix of specific, high-pressure points, guided (and sometimes intense) stretching, and wide-area, strong pressure. There was also this really wonderful part where she used both forearms across my back like it was some kind of amazing violin. That was awesome.

I have a collapsed disc in my back, and that means lots of massage therapists, even after being told, tend to end up messing with muscle tensions they shouldn't, and throwing my back out for days. This time, I told the masseuse in Thai, she clarified exactly where, and she listened. She was mindful, attentive, listened to how my body responded to the pressure, and knew when to push and when to let up.

My calves, the biggest victims of my neglect, got significant, serious work. Yes, it hurt. But afterwards, dear goodness did I feel better.

The tea, latte, and lunch afterwards.

After the massage, I climbed back into my clothes, accepted a complimentary cup of rather delicious tea, and soaked in the body bliss in the courtyard outside.

Another of the vocations the women can learn in prison is cooking, and the cafe next door is another program. I decided to stay for lunch.

So, I sat, eating a delicious kao pad khie and drinking a delicious iced latte, in 75 degree weather with a light breeze, in the shade of a lovely tree on the prison grounds. After a two hour, wonderful massage that healed my body and also made someone's life better. I texted a friend:

I'll be damned if this isn't paradise.

Did you enjoy this piece? Get more by subscribing to my letter. It's awesome, free, and contains stories every week from my adventures living around the world. :)