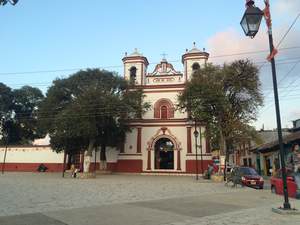 The Challenge of Catholicism

Here in San Cristóbal, I have a particular hitch in my exploration - one I haven't figured out yet how to work past. The overwhelming Catholicism.

Let me explain. In traveling the world, the idea of "colonialism" becomes more than just a history book lesson. It becomes a reality. In nearly every country on earth, Europeans showed up, killed millions of people, stole their resources, forcibly tried to convert them from their heathen beliefs, then occupied the place, made babies, and eventually turned them into a minority. It wasn't our brightest hour as a species. The Catholic church, far from pushing against such atrocities, actively supported them, and pursued colonialism of its own - a stark example of the dangers of good intentions.

However, are the pious people who live here in San Cristóbal horrible continent-spanning murderers? No, of course not. In fact, the church here has done as much good as anywhere, providing a voice and platform for indigenous rights that's helped bring the struggle of native folks to a broader audience and secure them some, but not all, of those rights. The relationship between the Maya and the Catholic church is much better than its relationship with the Mexican Government and a whole lot of other folks, and it's their opinion that really matters.

But every time I walk by a Cathedral, I can't shake the feeling that it was originally a fort. Sometimes literal, filled with ramparts and spaces for archers and cannons. Sometimes figurative, a voice of propaganda, self-justification, and exploitation.

History is complicated. And I know to really get to know the genuine San Cristóbal, the one that's relevant and meaningful to the people who live here, I'll need to put down my baggage and make peace with it.

Today though, I'm not quite sure where to start.