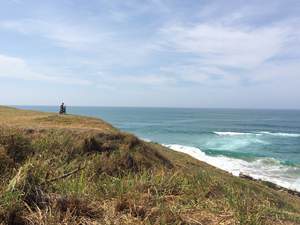 A Goodbye to Mexico

This morning, I closed my front door, headed down the two dirt blocks to the beach, and started walking.

Four miles later on Playa Manzanilla, I'd let the last five months stretch out behind me. Mexico and me. The dance.

There was the difficult culture and difficult times of San Cristobal - the roughest part of my journeys yet.

But we only grow from the hard stuff - and I did. Had an epiphany around where the good things in life are hiding. Leveled up my travel survival skills - How to Deal with Traveller's Diarrhea, and How to Get Out of a Bad Situation.

Even, by the end, started to make some friends. But San Cristobal and I just weren't a good fit. The most important thing I learned was

Bought a plane ticket for a city that looked sunny, packed up my things, and took the harrowing 3AM hour-long canyon taxi to the airport.

I stepped off the plane in Puerto Escondido - and found an entirely different Mexico.

I walked down the airplane stairs in jeans, two layers of shirts, and holding a jacket. It was 95F, bright sun pelted me from every direction, and my first thought was dear god it's hot. This is wonderful.

I met my Airbnb hosts, took a memorable quick tour of town, and landed home. I figured I'd spend a month in Puerto, see if the sun and warmth were able to pick me back up, and then go explore somewhere else in Mexico.

That plan got tossed. Instead, I stayed here for four months, using up all but a few days of my six-month-visa.

I lived in La Punta, a little offshoot of the main town of Puerto and the surfer destination of Zicatela.

La Punta's a calm place. Everyone lives within a 10 minute walk of the beach, and every evening, it fills with local families.

Motorbikes and carts pass by with bells and horns, tamales, bolillos, paletas, quesadillas. My favorite walk-by vendor, Lupita, comes by twice a week with fresh-baked bread, and fresh-baked brownies.

Yes. Someone delivers fresh-baked brownies to my house.

There are parts that take some getting used to - the ceaseless barking of dogs all night. The relentless heat of the afternoon, and its cousin, the hot nights. The utter inconsistency of internet and electricity.

But you can always hear the ocean.

And you're surrounded by a culture that just says, let it go. By very the people who discovered the Mexican Secret of Happiness.

Out on the water, after years of wanting to, I finally learned to surf. Along the way, was also taught how success works, in life.

I wrote pieces about depression and burnout that hit massive, humbling audiences.

I learned to make tortillas, cook entomatadas and enfrijoladas. Watched baby turtles take their first swim, paddling out with the tide. Practiced parkour on the most amazing set of beachside rocks. Went to fiestas, made friends, got to know a small town inside and out.

It's been a wonderful four months. But mostly, when I look back, I think I'll remember two things.

Before I came here, when I sat on the beach, it was a beach. Big flat area of sand. The waves were waves. Moving bits of water without any real rhyme or reason that sometimes crashed. They were pretty.

Now, having lived with the ocean and a beach for four months, things have changed. Beaches aren't static. I've watched my beach sculpted by the swells, walked out to rocks that were ten feet below water just a few days earlier. Seen the break points for waves shift hundreds of feet, sometimes even in an hour.

Waves are no longer random collections of water, but sets of movement, predictable. I see them differently too, watch how they build and break and pull through the tides. I get caught breathless by certain breaks, how they mix with the light.

I've been reminded of a quote I can't quite dig up, an astrophysicist answering someone who asked if all his learning didn't ruin the magic of looking at the stars. It went something like this.

Have I lost my wonder? My ability to look up at the stars and just feel wonder? Let me tell you what I see.
When I look up into the sky, I see millions of balls of gas, each playing out a slow-motion explosion. I see gravity wells so immense that they crush atoms into light, then hold that light so tight that it takes thousands of years for it to even make it out of their stars.
I see the light that escaped that explosion, somehow made its way across trillions of miles of space without running into anything, happening to land on our little planet, make it through our atmosphere, and hit in the sensors in the back of my eye.
I know light from a billion-year-old explosion just hit my eye.
Tell me, honestly, do I see more wonder or less?

Knowledge doesn't take away wonder. It deepens it.

This is where I came to recharge. I stayed with an amazing family with a wonderful dog who became my best friend - and I could go on for quite some time about them. But I also was lucky to live in a wonderful space.

Out my sliding screen back door was a second floor balcony, as big as my entire apartment. There was a dining table, benches with a wide coffee table, a hammock, and the wire chair I'm writing you from right now.

Always, a slight breeze curls over the low walls. Always, you can hear the ocean.

I spent enough time out here to get to know and name the 12 hummingbirds that come by the feeder. To learn the geckos that stop by, know what time the bats show up. To tell by the light on the wall how long I have until another spectacular sunset.

But most of all, this balcony is where I recharged. First from the depths of San Cristobal, then from an insane full-burnout product launch at my day job.

Regardless of how lost I became, here is where I found myself again. A safe space, full of light. Always, the sound of the ocean.

Will I Be Back?

Despite all the wonderful, honestly, I don't know. If I ever really need a place to recharge, it's absolutely at the top of my list.

But I never fell in love. I've thought about Thailand every single day I've been here.

There's something wonderful, cohesive, life-affirming, simple and whole about Mexico.

A culture where people enjoy their lives, know how to celebrate, laugh, and not take anything too seriously.

One where simple and good are almost enough to be a religion. Where people don't lay awake at night worrying.

It's a wonderful, ahh-inducing place.

But deep in my heart, I don't think it's me.

Tells me you loved it!
Love
Shows your friends how awesome you are.
Share
Makes you look smart to your followers.
Tweet
— More Writing —
Cómo ayudarle a alguien con depresión.
Las mejores formas de ayudar una person con depresión y por qué esos funcionnar.
A Goodbye to Paris
Saying another goodbye to the city I love, and how loss is never even.
My Massage in a Thai Prison
There are thousands of massage places in Chiang Mai. None are as awesome as the Chaing Mai Women's Correctional Institution Massage.